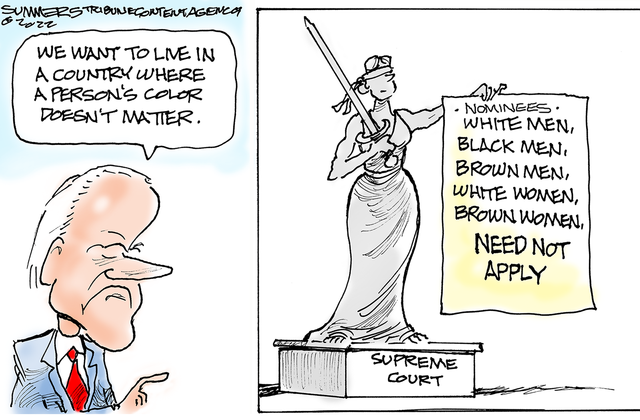 Joe Biden recently stated that two main criteria he will be using to choose who to nominate to the Supreme Court to replace retiring Justice Stephen Breyer, is “black” and “woman”. Not only on the surface is Biden’s pledge racist and sexist, it is also both unconstitutional, and a violation of the 1964 Civil Rights Act which clearly states that it is unlawful for an employer to fail or refuse to hire any individual because of such individual’s race, color, religion, sex, or national origin, which is what Joe Biden is doing to all non-black, non-woman candidates. A black woman may very well be the best and most qualified candidate to fill the vacancy on the Supreme Court, but this is not the process in which we go about finding that out. Joe Biden has come right out and said, he is rigging this process.

This should not be a surprise because Joe Biden has already done this. During the Democrat primary, Biden stated that he would use the same two criteria, “black” and “woman”, when choosing who would be his running mate. How has this worked out for him? He chose Kamala Harris, who has been an utter disaster in her role. Her primary assignment as Vice President has been the “Border Czar”, and under her watch, over two million illegal immigrants have entered our country through the southern border. She has yet to visit the border to see for herself the chaos that is going on down there. Thousands of illegal migrants have died on their journey to the United States as a result of Biden’s policies. Record amounts of fentanyl have crossed the border which has killed a record number of American citizens. MS-13 gang members, known felons, and terrorist have crossed the southern border into the United States in the last 12 months. DHS Secretary Alejandro Mayorkas, said that the border situation is “worse now than it, frankly, has been in at least 20 years, if not ever.” Choosing Kamala Harris for the optics has damaged our country, race relations, Kamala Harris, and all black women.

But Joe Biden has used this same type of criteria to fill out his entire administration. When selecting his Cabinet, Biden said that “my cabinet, my administration will look like the country” which means he will select his nominees based on race, gender, and sexual orientation. Transportation Secretary, Pete Buttigieg was not selected because he was the most qualified or the most experienced candidate; he was chosen because he was going to be the first gay cabinet Secretary. And what has happened? We are suffering through an unprecedented supply chain crisis with shipping containers being lost or stolen from docks, and a backlog of cargo ships spreading up and down the West Coast. 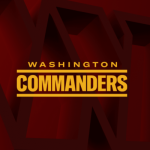 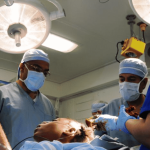